Dr. Mohit Sahni joined our institute in the year 2010 after finishing his fellowship in Neonatology and Neonatal Cardiology at Hospital for Sick Children, University of Toronto which is one of the finest and highly rated Children Hospital in the world. He is being trained at one of the finest institutes in India and abroad.

After completing his MBBS from Karnataka Institute of Medical Sciences or Government Medical College, Hubli, Karnataka. He did his DCH from Dayanand Medical College, Ludhiana, Punjab. Which is considered to be a premium institute in Northern India.  He did Senior residency and DNB Pediatrics from well renowned St. Stephens Hospital and research Institute, New Delhi.

Final two years of the Neonatal fellowship he completed from Hospital for Sick Kids, Toronto. This is rated in the top five children hospitals in the world. During his complete three years Neonatal fellowship, Dr. Mohit Sahni did final year in Neonatal Cardiology under guidance of Dr. Patrick McNamara. He also did Post-Doctoral Diploma in Research Methodology and Project Management from University of Toronto, Toronto.

After completing three years Fellowship in Neonatology and Neonatal Cardiology he joined Hospital for Sick Kids as Faculty.

We are lucky to be attached with him from the last ten years.

His constant endeavor to improve Neonatology and Neonatal hemodynamics knowledge paid him with the posts of  :

His love for teaching made him popular among neonatology fraternity of India. He is also a recognized teacher of DNB pediatrics and CPS diploma (DCH) in Pediatrics. 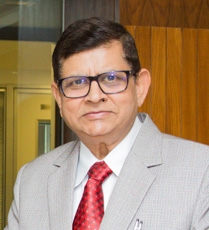 I wish to take this opportunity of sharing with you my vision of providing world-class health services to the people of south Gujarat.

This check-up evaluates your child’s health. It helps in monitoring not only the growth and nutritional requirements but also the overall health status of the child.

Increase in stress levels and workload can impact female health. Health monitoring has thus become mandatory in order to cope up with the rising risk of the medical disorders. This Package offers a detailed evaluation of woman’s health profile.

This package includes all the tests of comprehensive health check up plus to check the levels of thyroid hormones, iron, and viral markers.

Do you party hard? Or do you have symptoms of nausea, vomiting, weight loss, abdominal pain, bloating, indigestion, yellowish discoloration of skin and eyes, etc. This health check up helps to determine the health of your liver by measuring levels of proteins, enzymes, or bilirubin in your blood.

People who take control of their own diabetes care by eating healthy foods and living an active lifestyle often have good control of their blood sugar levels. Still, regular health checkups and tests are needed. Regular check-ups can catch early signs of complications.

Most of the people are not aware of the kidney injuries. Some people are at higher risk of developing kidney disease and should have their kidney function checked even if they feel well. Treatment can slow down the disease and prevent or delay kidney failure. Because chronic kidney disease often develops slowly and with few symptoms, many people don’t realize they’re sick until the disease is advanced.